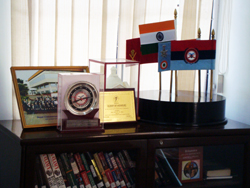 Indian Ex-Services League has its headquarters at 9 Nyaya Marg, Chanakyapuri, New Delhi. All State/UT Leagues are affiliated and are located in their respective states.

IESL President, 3 Vice Presidents and the Treasurer are democratically elected where as General Secretary is a selected whole time staff appointment. In addition the President nominates three Vice Presidents for specific duties assigned by him. The apex body of the League is the Governing Council, and the Executive Committee is assigned to look after the day to day management of the League.

The States/UTs elect their delegates on pro-rata basis as per their IESL Common Membership strength on the cut off date. The President of all the State/UT Ex-Services Leagues are ex-officio delegates. The delegates elect one Governing Council Member for every 3 delegates of the State, who represent their State in the Governing Council. The delegates elected by the States/UTs elect one President and three Vice Presidents of IESL. The Governing Council also elects one of its members as Treasurer. The President has been authorized to nominate 3 Vice-Presidents with specific duties assigned and also with a view to ensure representation of each zone of the Country on the Council. The Council also elects the Executive Committee, which meets more often and executes the decisions taken by the Council. All the office bearers elected/ nominated are Hony appointments.